Tacking the dinghy between the fish traps and young boys in a traditional canoes, we edge closer to the stilt village built above the reef. This traditional over water village is home for the fishermen who have been stopping by Florence over the last couple of days. Although they have said we would be very welcome to visit their village we can’t help but feel a little apprehensive as we approach, interested to see this very different way of life but nervous about how we will be received.

Our apprehension soon leaves us as groups of children sprint to the ends of the wooden platforms, waving wildly, shouting hello and starting a celebratory back-flip competition off the dock and into the water below their houses. These grinning bundles of life are the children of the Bajo people, also known as The Nomads of the Sea. 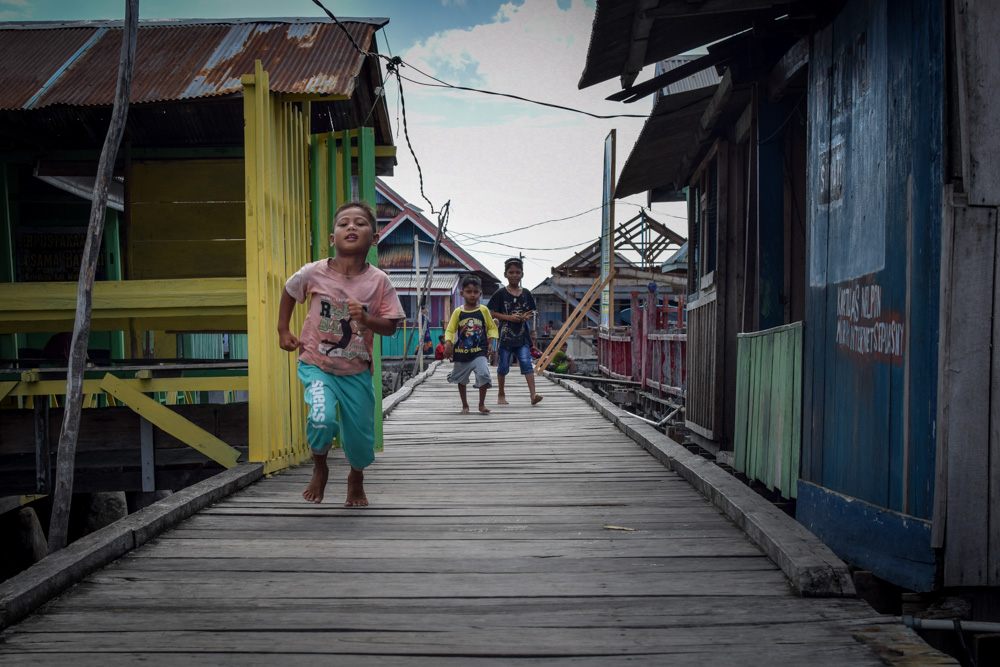 Before settling in the stilt houses above the reef, the Bajo people lived aboard wooden boats, roaming and surviving off the seas for centuries. Either influenced by the modern world with its need for borders and ownership or their own desire to settle, the Bajo people stopped living full time at sea and settled in stilt houses over reefs throughout Indonesia. This stilt village is unattached to the main island, some villages are on reefs more than a mile from shore.

The villagers are still heavily reliant on the sea to live; fish and seafood are both the main source of food and income. Famed for their free diving, fishing and sailing abilities, the Bajo people still spend most of their days on or in the water. Something the children certainly seem to love.

Although most of the sailing canoes have now been replaced by diesel engines, arriving in our sailing dinghy brought an intrigued and friendly crowd to the dock. We were helped up onto the bamboo structure that linked us to the main wooden walkway through the village. Although the houses are unattached to the mainland, wooden (and in shallower parts of the reef, concrete) walkways connect most houses together and allow the villagers to easily reach each other, their shop, school, medical centre and mosque.

Tentatively moving over the gaps in the walkway, it wasn’t long before we had a friendly, enthusiastic group of little guides. The people here have their own language, yet many also speak Bahasa, the Indonesian National Language and a little English.’Hello’ and ‘photo photo’ are often the first words exchanged by the children. 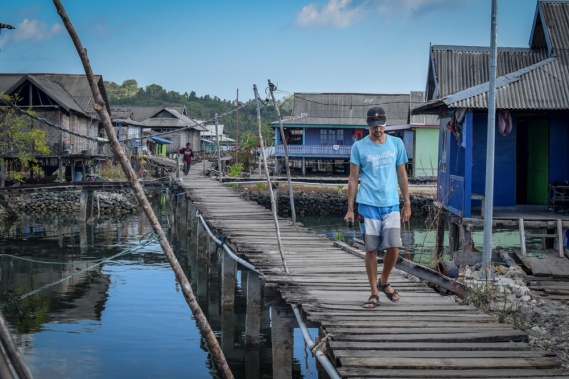 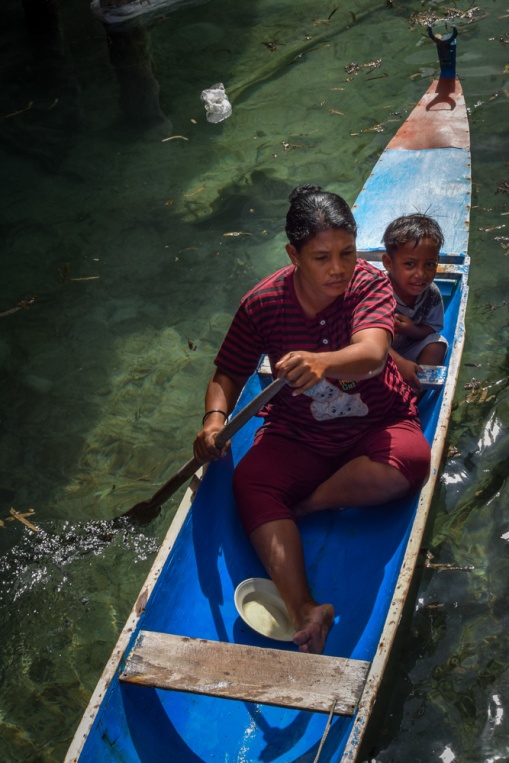 As we walked through the village, it was immediately obvious that the Bajo people are facing the same issues that many traditional communities battle with today, how to reconcile their traditional ways with modern day life. Solar panels grace some of the roofs and a spiders web of cables link some of the houses. A tower being constructed over a concrete base will soon improve communications to the village.

They are unfortunately also struggling with other modern world problems such as the need to dispose of single use plastic. Heart breaking as it is, like many places we have seen in Indonesia, all rubbish currently just goes straight into the sea to be washed away with the tide. It’s very easy to judge this method which is so devastating for the environment yet with no landfill available or land on which to burn their rubbish, this is currently the easiest option for remote communities such as this. We are not environmental experts, nor do we feel we can spend such a short amount of time in a country and start preaching about how they should live. We will only say that nothing has created such a strong urge within us to further reduce our own plastic use than the last few months spent in Indonesia.

The reef opposite the village, despite being heavily fished and swimming in plastic is among some of the absolute best we have seen; colourful hard a soft corals with a sheer drop off into the indigo blue depths surrounding the island. Eco tourism and seaweed farming are the talk of the future here, we can only hope that the years to come are bright, balanced and sustainable for Indonesia’s Bajo communities and their beautiful surroundings. 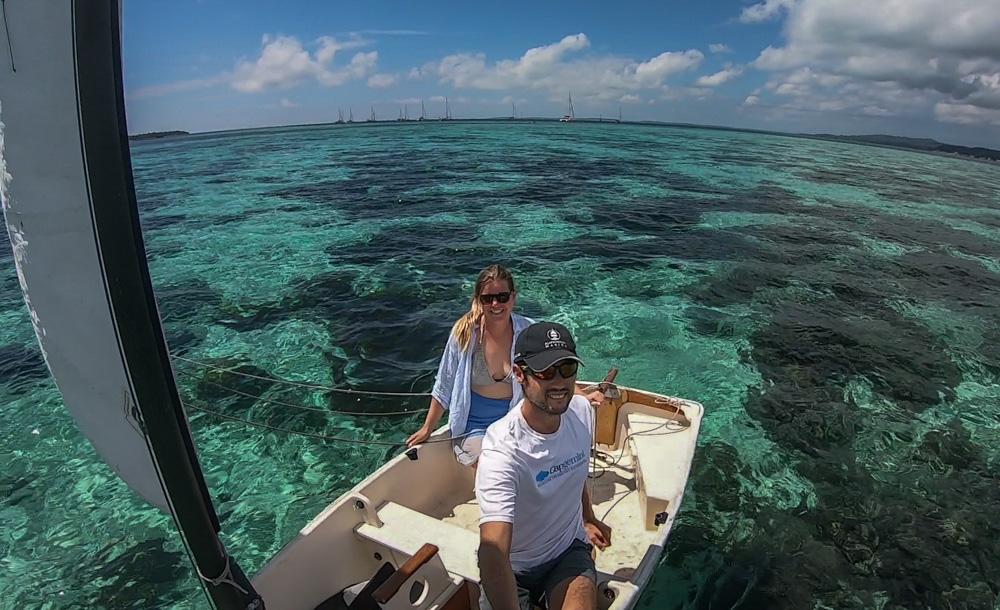 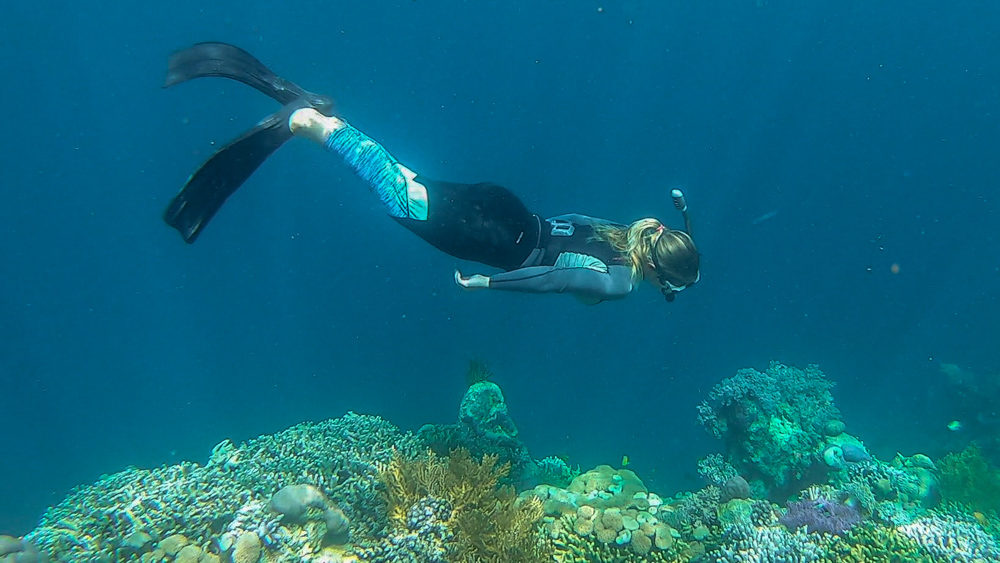 11 thoughts on “Life Over and Underwater in Hoga”