With the Pacific cruising season starting, we needed to tear ourselves away from the beautiful San Blas Islands and start making tracks towards the Panama Canal. Although we were sad to be leaving what had been the best place of our trip so far, we were incredibly excited to get closer to our South Pacific dreams, via one of the man made wonders of the world, the Panama Canal. Transiting the canal would mark the start of a totally new chapter of our adventure.

But before we donned our grass skirts and started practicing our hula dancing, we needed to get through the mountain of paperwork and red tape involved in the canal. We had been warned we would need to open our wallets and bow to the officials so were not looking forward to moving to Colon, the canal base on the Atlantic side, in order to start the process.

We felt our stomachs sink as we picked our way through the anchored ships to find our own tiny spot off Colon’s Club Nautico, between the cruise ship, container docks and city. Colon has a well earned reputation for being a dirty, smelly and dangerous city, full of gangs and crime, so we felt a million miles away from the beautiful San Blas Islands we had just left. The anchorage off Club Nautico is far from perfect as there is very little room and each time a ship arrives/leaves, the wash from their thrusters spin all of the yachts around which can cause them to collide. That said, it is the only place you can anchor and get ashore in Colon. With the Marina miles away and quoting crazy prices we decided to stay put until we had our transit date arranged with the canal (normally about a week long process).

We decided to make our transit without the help of an agent as this saved us $350-500. It meant we needed to arrange each part of the process ourselves and deal directly with the canal authorities. Mostly the process was straight forward, if a little drawn out, and the majority of the canal authorities were very friendly and spoke excellent English.

Once registered on the system we were able to arrange to have the boat checked/measured in a different part of the harbour (The Flats Anchorage) to ensure it complied with canal regulations (motoring speed, toilet with holding tank etc.).

Then, when authorised for transit we needed to pay for the transit before being able to receive a date. The $1,800 fee (which includes a refundable deposit) has to be paid in cash to a bank, in a particularly dodgy part of the city. You are recommended to take a taxi everywhere in Colon to reduce the risk of getting mugged, so it’s not the kind of place you want to be wandering around with lots of cash. We struck it lucky heading to the bank as we found an English speaking taxi driver who was familiar with the canal process. He took us right to the door of the bank and waited for us outside. Taxi’s are about the only thing in Panama which are cheap!

We were not quite so lucky when we called the canal later that day to receive our transit date, a 3 week wait due to a huge backlog of yachts! This would take the whole process over a month and mean that we would be into the Pacific much later than planned.

Although frustrating, the backlog of yachts had one positive in that we got to catch up with friends we had met in The Caribbean and meet some new boats also heading into the Pacific.

Keen to get out of Colon until our transit date, we sailed out in company with yachts ‘Sandy Cheeks’ and ‘Restless’ back East, eventually arriving in Portobelo, an interesting historic town down the coast. Portobelo is a safe town with a good calm anchorage, river to explore, and plenty of historic forts to look around. With so many cruisers waiting there for their own transits there was also a good social scene. 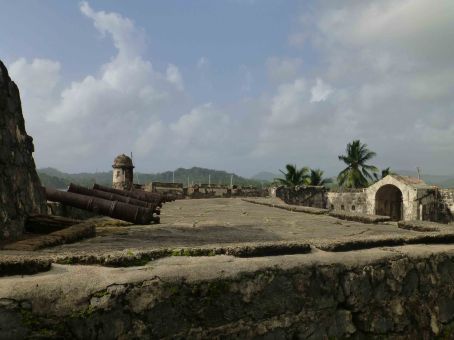 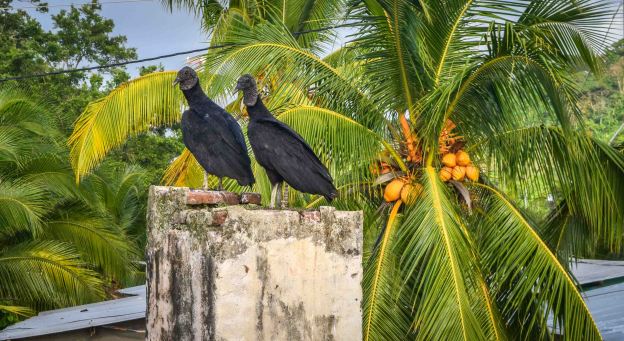 As our date for the canal approached Matt volunteered to help some new friends through as a line handler. As well as giving something back to the cruising community we get so much from, this also would give us some knowledge of the canal process to make our own transit less stressful. This meant heading back to the Club Nautico anchorage in Colon a few days early, where Matt departed on Olgalou and Amy stayed to make sure Florence was safe. Matt’s transit was very peaceful, however Amy had to up anchor and move Florence in the overcrowded anchorage by herself as another ship came in (not an easy task single handed as our anchor windlass is broken so we have to haul it up by hand).

We made several trips to the supermarket in Colon to get ahead of provisioning for the Pacific and save time once through the canal. Food is much more expensive and difficult to come by in French Polynesia so it was a fine balance between making sure we had enough and Florence still floated.

Finally our time to transit came, in order to combat the queue of yachts the canal sent 12 of us through together. This meant we did not have a ship in the lock with us causing turbulence and potential damage with wash from their engines. 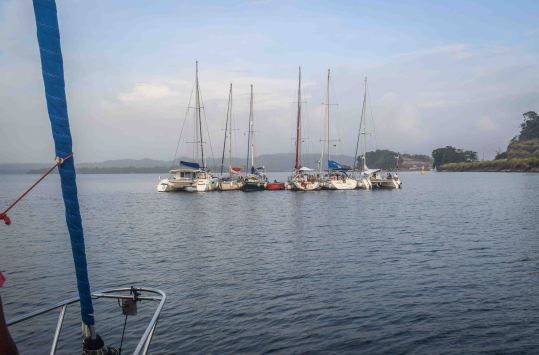 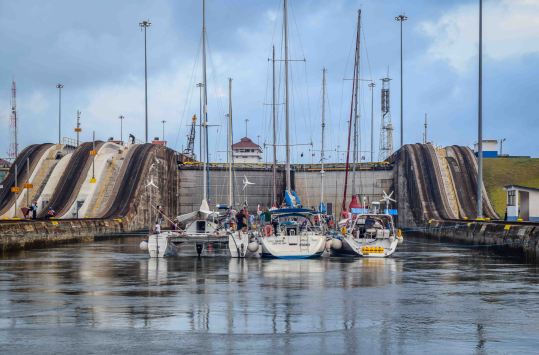 As you need 4 line handlers on board, in addition to the skipper and canal advisor, we hired 3 local guys to join us for the transit. You can get volunteers but as our transit date changed and then changed back and as a lot of yachts were going through at once it did not work out for us.

We started in the afternoon and headed for the first 3 locks which would take us up to the level of the lake in the middle. As we approached the locks we rafted up side by side with 2 other boats and remained like this until we reached the lake at the top of the locks. We arrived in the lake in the dark and all rafted up again on a mooring for the night. At first light, we set of individually on the 4.5 hour motor across the lake (you are not allowed to sail). We saw two crocodiles, one swimming and one basking on the bank, making us glad we had not gone for an early morning swim like some had! The down locks were the same process but less turbulent and finally we entered the Pacific, near Panama City at dusk.

Our two day transit ended up being very easy and stress free. We had a great Adviser on board each day, who as well as keeping us informed as to what was going on, told us lots about Panama and life growing up in Colon. The line handlers knew their jobs well, keeping us central in the lock and out of trouble. We entered the Pacific relieved to be through and excited to be onto to next part of the adventure.

The total cost for us to go through the canal (not including the refunded buffer deposit) was $1,589 broken down as follows;

On top of the above we had to feed the 3x line handlers and the canal advisor whilst they were on board, and boy did the line handlers eat!

Panama has been incredibly expensive for us and left us itching to get away and stop spending money. We do have to remind ourselves that the transit cost pales into insignificance against the $800,000 that the really big container ships have to pay. Also reaching the Pacific via either the north west passage and Cape Horn would have been a bit more of a challenge…

Advice for other Yachts

– We were glad save the money and not use an agent. There are plenty of blogs available that provide an excellent guide to getting through the canal process without an agent so we wont repeat that here. We found the following particularly helpful; Yacht Adina, and White Spot Pirates.

– If hiring lines, fender, line handlers etc from a local provider (we used Tito) be firm and make sure the receipt states transport/pick up is included. Luckily ours did but there seemed to be a regular habit of trying to charge an extra $20 at each end for a water taxi/anything else they think they can get away with. Many of our friends who paid him for a Zarpe got stung later or did not get the Zarpe.

– When waiting for your transit, Portobello makes a great free alternative to the expensive Shelter Bay marina or the dodgy Club Nautico anchorage. The Flats is not a usable anchorage as there is no place to get ashore.

– Helping another yacht through before your own transit will give you a much better idea of what to expect and make taking your own boat through less stressful.

– The farmers market in Panama City is great for fresh veg and fruit for the Pacific passage. The produce is much cheaper than the supermarket and lasts longer as it has not been previously frozen/refrigerated. 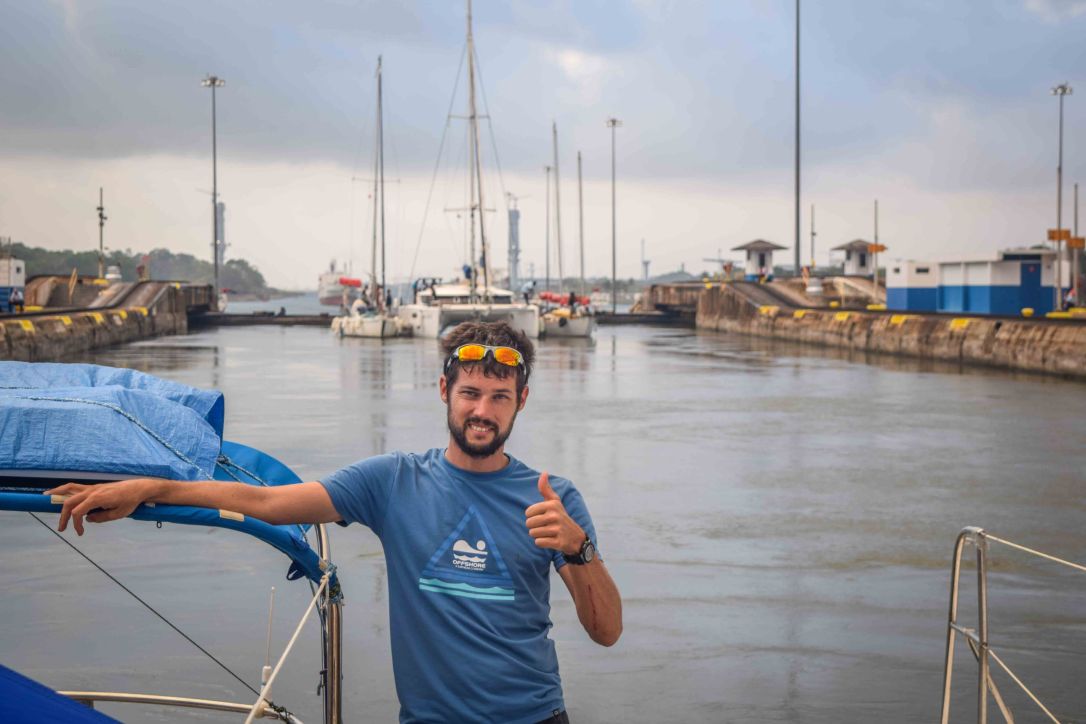 5 thoughts on “The Panama Canal – Gateway to the Pacific”