After spending two days in La Gomera Marina rushing around preparing to leave European facilities and for the 750 mile sail to the Cape Verdes, we retreated to a quiet bay a couple of miles down the coast to wait for a 7 day weather window for the crossing. After the purpose and rush of the last few days and no idea of when we could set off to Cape Verde we entered the bay feeling flat and lacking direction. Before resigning our evening to watching a film we sat in the cockpit playing cards and enjoying the last of the evening light. As darkness came on we were entertained by a huge lightning storm south of Tenerife, far enough away that we could not hear the thunder but lighting up an impressive cloud-scape, this went on for over 2 hours. For highlights we also saw several shooting stars. We turned off all the lights and dropped the spray-hood to drink in the panoramic entertainment. Wandering up to the bow we noticed the phosphorescence glowing around the anchor chain as the water moved past it, we took the boat hook and swirled it through the water leaving glowing trails like a giant sparkler, just underwater.

We knew we would be likely to be at sea for the 5th of November this year (Fireworks night in the UK) but that night nature gave us more that we could get from any commercial display. We lay in the cockpit gazing up at the stars re-discovering what this trip is all about for us. We love the outdoors and nature, and we feel at peace out here on a beautiful calm night. We just needed a bit of a reminder about what we are doing out here.

We spent the next two days making the most of being ready to sail to Cape Verde go by snorkeling in the crystal clear waters and relaxing on board. We also swam with our first sting ray.

October is too early in the season to have consistent trade winds from the Canaries and we had been experiencing even more southerlies than expected, obviously not very good for sailing south. As we watched the long term forecast progress, it became clear that we either left in the next couple of hours in light winds or risked not being able to move for at least another week. Preferring the idea of light winds and a flat sea over lots of wind and lumpy seas, we went for it.

Once out of the wind shadow of La Gomera, we found more breeze than expected and were relieved to turn off the engine and average 7 knots under cruising chute. Unfortunately this didn’t last long and the next day was spent more as forecast, drifting at 3-4 knots. We made the most of the light winds and flat seas by eating from plates without losing our food, playing cards on deck without losing them overboard and generally enjoying walking around the boat without having to hold onto something.

The relaxation didn’t last long as the wind shifted and built to over 20 knots in the night causing us to have to first gybe, and then drop the cruising chute a few hours later, shifting to a poled out genoa. These changes require all hands on deck and mean very little sleep for the person who has to be dragged out of bed on their off watch. Although we work as a team to make these changes fairly quickly it does put extra strain on a short handed crew when they have to be made at night.

The wind over the rest of the passage was much more consistent and we settled into the routine of watches and life offshore. We are finding our 3-4-4-3 hour watch system though the night much more successful but it always takes time to get used to sleeping with your bed pitching and rolling beneath you.

On our last night at sea we were visited by a small pod of dolphins. They always seem to want to say hello, announcing their presence by making a big splash next to the cockpit before moving forward to play in the bow wave. Matt was on watch and Amy has standing orders to be woken up at any sight of dolphins/other wildlife, so we both stood on the bow watching the dolphins in the dark. They were leaving glowing trails in the water due to the phosphorescence, which is such an amazing sight. However this magical scene was rudely interrupted by a flying fish, escaping the dolphins and hitting Matt squarely in the crotch before bouncing back over the side leaving some scales and a very fishy smell. Amy nearly fell over the side laughing! 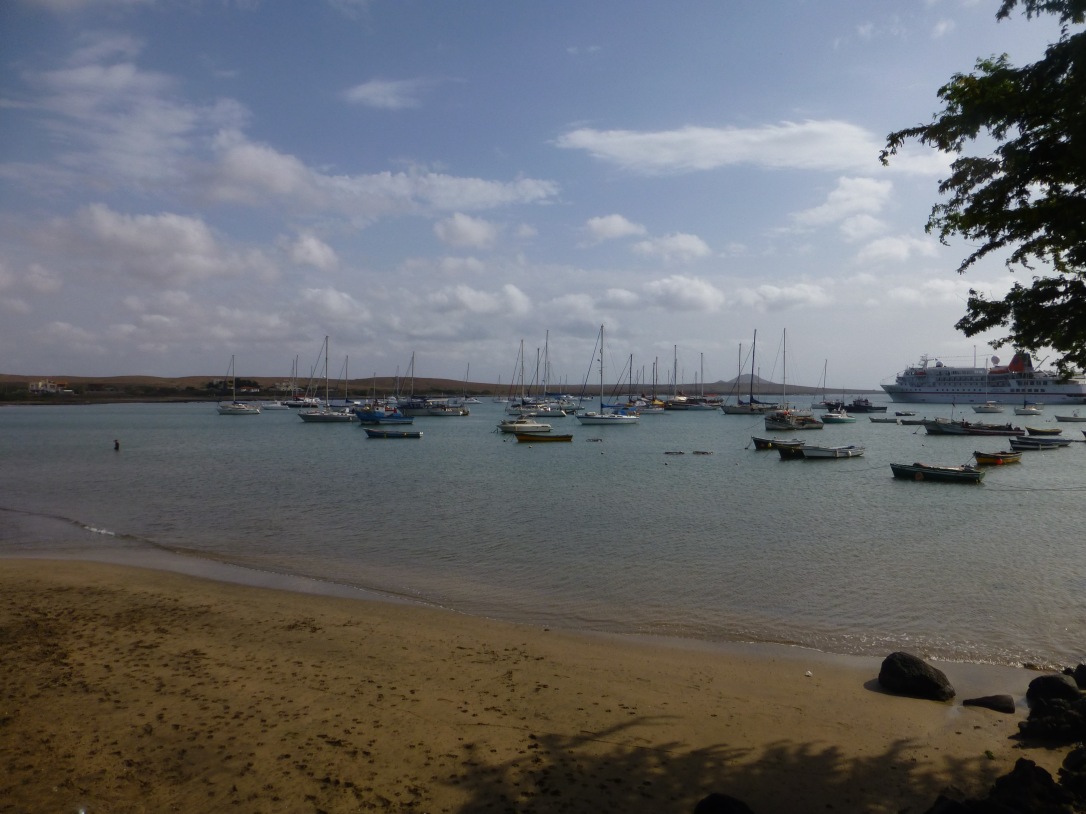 Having safely arrived in Cape Verde after 6 days sailing, we have some time to explore the islands before the trade winds fully kick in and we set off across the Atlantic in late November/early December. The Cape Verdes are very different to anywhere we have visited before and we will share our experience of these islands in our next post.